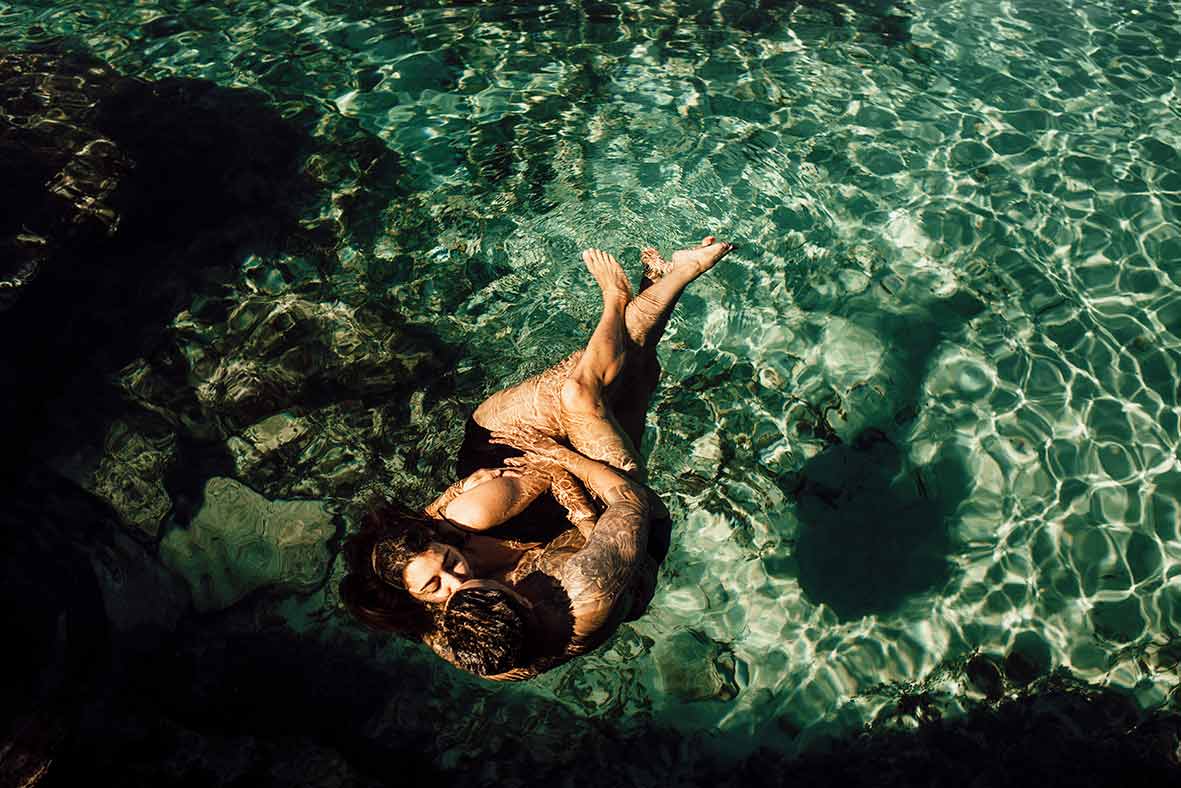 After all the confinement we had I think many couples have realized how lucky they are. It is not easy to have lived together all those days in a house without being able to almost go out. Many relationships have been tested and some have come out even stronger. In this couple’s session in Mallorca I was lucky enough to meet an incredible one.

From the moment they contacted me by phone for this couple’s session in Mallorca  I realised how nice they are. Her name is Cristina and she’s one of those people who transmit good vibes and you like to have them in your life. Her boyfriend’s name is David and he’s an emergency doctor. With that I think I say quite a lot for all that it involves these days. They have had a hard time surviving with all the stress and fear that has been going on.

For this couple’s session in Mallorca they told me that they would like a place by the sea. I especially love Ses Salines, I think there are some spectacular places. When I proposed it to them they told me yes and we agreed on a specific day. It was difficult for both of them because David had a complicated schedule and on his days off he likes to rest and not go for a couple’s session in Mallorca. It is quite normal but I knew that with me it would be an original and fun experience.

When they arrived poor David looked tired and sleepy. Cristina was excited and they had brought changes of clothes for the photos. We started towards where I had already thought among the rocks by the sea. When I have a couple’s session in Mallorca I like to ask them questions and get to know them a little better. David told me that he is from a family half Chinese half Taiwanese. He was born in Madrid and has always lived there where they met. Cristina  lived in Madrid too until they moved to Mallorca together a year ago.

I took Noah my dog as I almost always do and Cristina and David love dogs. I love people who are already animal lovers. They started to tell us how they met on the internet which is normal nowadays. That it was something mutual and they immediately connected. They have a hobby in common and that is to dance the bachata, which I think is very important. Having tastes in common and something so sensual and fun at the same time seems great to me.

We got where I wanted to take the pictures because you have to walk a lot. It was early because this couple’s session in Mallorca was in the morning. There was quite a lot of sunshine but I was already counting on that and I chose a place where I could do great pics. I also like to use the texture of the rocks as a natural studio background and that place is perfect.

I started taking pictures of them in a natural way as I like it while they were telling me things. Apparently it was their anniversary that same day. They had planned to go to a Japanese restaurant at noon called Kasui to celebrate it. I like gastronomy and trying new places, so I wrote it down right away. Lately I have also learned to make sushi so a good Japanese is something very interesting for me.

Cristina and David felt more and more comfortable with the camera and forgot that I was taking pictures of them. They changed clothes a couple of times as they had brought some very cool leather jackets. Taking advantage of the sun and playing with the light great pics came out.

I asked them if they dared to do something  different. As they were so nice and loved each other so much I wanted to make something very original for this couple’s session in Mallorca. I asked them if they wanted to take pictures underwater without clothes and they said yes  happily. The water had an incredible turquoise colour and although it’s winter Mallorca is a paradise.

They took everything off and jumped into the water in a fun way. Once in the water they played with each other and it was great. You can see by the photos that they had a great time and the result when they saw it they loved it.

I had a great time with them during this couple’s session in Mallorca and it was a pleasure to meet them. I hope that we will see each other very soon to go and have some drinks or eat somewhere interesting in Mallorca.

The best fincas in Mallorca