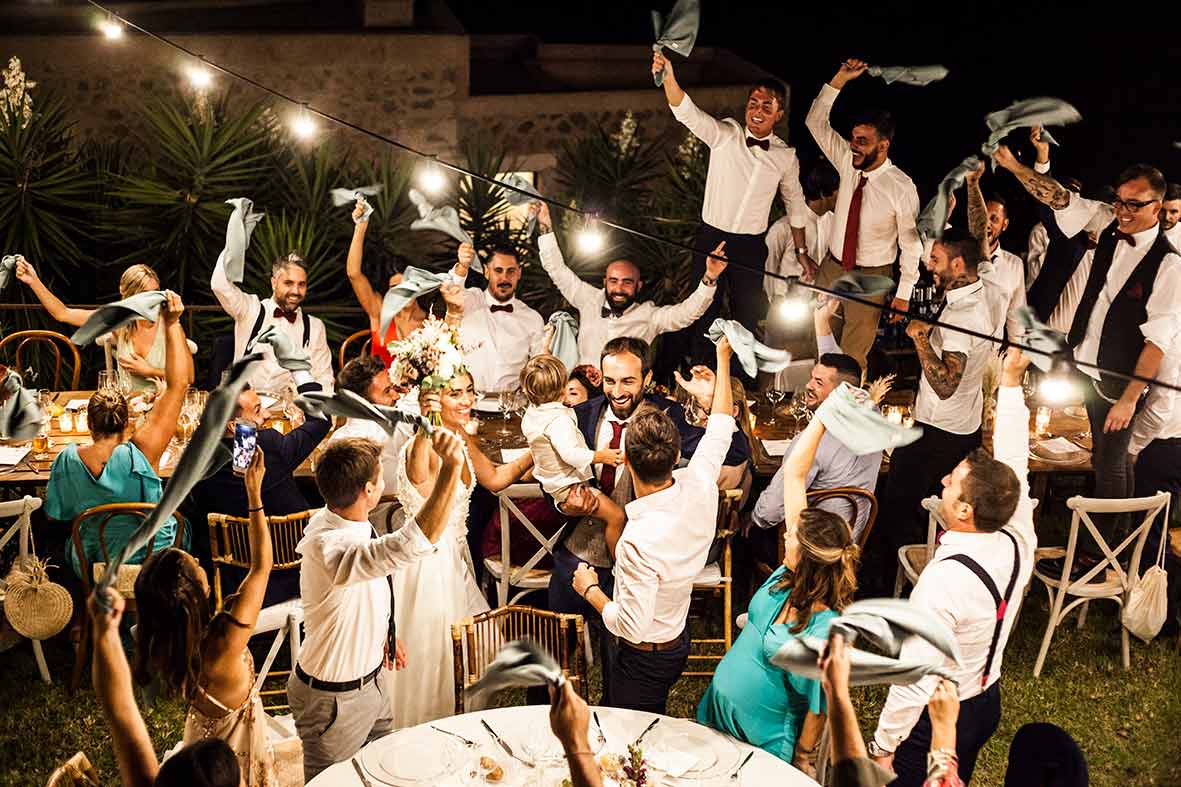 ARE YOU HAPPY WITH YOUR PLACE AT THE TABLE?

-You’ll see, you’ll see. I don’t even want to imagine what table they will have sat us at. I’m afraid of it and I already have the twitch in my eye. Anyway, I have the perfect plan. We leave the church ten minutes before. Don’t make faces at me, Margarita, please, I know you’re going to miss out on all that rice stuff, but, admit it, it’s a bit of a mess.

This way, we get to the banquet earlier and we are in time to change the seating plan. -My boyfriend has been repeating the same story  since he got out of bed.

-Carlos, what are your talking about seating plan? How long have you spoken English if you only speak  Spanish and half the time we don’t even understand each other?

-And you’re the modern type? Marga, Princess, the seating plan at your wedding is that place they put at the entrance of the ceremony with the distribution of the tables. – My God! It can’t be true,  he is explaining it to me.

I know what a seating plan is. You don’t have to explain it to me.  So, how do you plan to change it? Are you going to take  a tipp-ex and some markers  to change the names? Maybe now, in addition to the languages, you also master the lettering and nobody notices the change.

-I hadn’t counted on that setback. I don’t care what those infernal papers made in bad faith say. I’m telling you, Margarita, I’m not going to sit at the same table as those of your work, no matter what your friend says and where she puts us. We have already experienced this and we know what happened.

-And if she has put us all together, what do you want to do?   Don’t leave me in the lurch,  I ask you, please. She must be having  enough trouble with the tables to call her  and tell her  that my boyfriend prefers to sit alone …. because you sit alone, I’m warning you.

HOW TO DISTRIBUTE THE GUESTS ON THE TABLES.

I doubt very much that this is an isolated situation. It will probably be repeated in the homes of most of the guests at the event. The irony is that the bride and groom will probably be on the verge of separation trying to do their best.

No matter what you do, no matter how hard you try the seating plan at your wedding, in the end we are all nonconformists by nature. No one will be happy with the place they have been given.

Sooner or later you will feel the urgent need to put a single sign at the entrance: “Sit where you fucking like, but don’t tell me anything at all”.

WHERE TO PLACE SOME PEOPLE: RISK SPORT

There are more and more people who are passionate about risky sports and living great adventures. Without the need to throw ourselves off a mountain in free fall, I think that this year is in itself quite a dangerous feat.

However, I believe that one cannot understand the meaning of the expression “adrenaline rush” until one has sat down with one’s partner to organise the distribution of the tables for one’s wedding.That’s real emotion.

And finally a day comes when you can no longer avoid that dreadful moment.

-Chuchi, shall we organize the sitting plan at our wedding? Run, get your list. -Much better to start with enthusiasm. There will be time to get nervous. I’ve been sleepless for nights, thinking of how to tell him  that I won’t sit at the same table as his father, the skunk, but I can’t think of any subtle way. And while I’m thinking of the sentence, he treacherously anticipates me.

-I’ve been thinking that my father would be better sitting with us. -Well, a great start. -I can’t put him with my mother, can you imagine? Before the wedding is over, she will have stuck a knife under the table. Besides, we’d better put my father with us because my mother has already told me that she’s going to bring a companion.

If I still haven’t understood why she left him, as if to understand now that she wants to fuck up his life.- I’d give you a long list, but maybe it’s not the right time. I’d better change the subject.

PLACE THE PERSON WHO IS SHOUTING FAR AWAY: KISS EACH OTHER.

-I’ve been thinking I’m going to put everyone in the office together. -What do you think? .- What’s this stupid man laughing at now?

-I don’t know, honey. Do what you want, after all it’s your office. I imagine poor Carlos’ face, as if he were at a wake. Margarita, glaring at him and the others cristising him as soon as he gets out of the car. Have you forgotten the last wedding we all attended and he turned up in leather sandals? Hahaha. How brave! And your stupid boss who wouldn’t stop looking at him.

I still haven’t forgotten when Carlos, tired of being looked at,  started throwing kisses at him. Hahaha. Without a doubt, the best thing about that boring wedding.

-How childish you are! By the way, I’ve already told Menchu that she can’t bring that new groom she’s now. Who knows what he is like.

But what do you care? It’s not like he’s going to dance with you or steal your cutlery. Let the woman bring someone to talk to at the “funny” table .

-If you feel so sorry for her, why don’t you sit her and your father at another table? – It had to be said and it was said. But it didn’t sound subtle.

-What did you mean? What’s wrong with my father? He gets up on the sofa faster than when I take my clothes off and looks at me with eyes that would scare Edward Cullen himself.

-It smells bad, too. He  doesn’t wash off, love. I’m sorry, but he leaves a trail wherever he goes. – I could have kept quiet for the sake of world peace.

-Look, sweetheart, we’ve overcome the obstacle on the gift list that I categorically refused to accept because it seemed and still seems like an armed robbery to me.

Then the modern woman of the 21th century, at the height of gender equality, decided that there should be different details for boys and girls and I accepted that too. But I’m going to ask you not to say that the idea of honey for women and wine for men is mine. I refuse, cave woman.

I accepted all of the above, but if you think I’m going to give up now because of what you’ve just said about my father, I’m sorry to say that I won´t change my mind.

I’ll get married even if you want to sit him in the kitchen with the dj and the photographer. I’m not going back any more. But the next day, when that horrible being that has possessed you since I put a ring on your finger abandons you, when everything seems to be just  like funny stories from the past, we’ll see…

Photoshoot for kids in Mallorca